The Weimar Republic faced many problems.Perhaps the greatest danger was the weakness within – the constitution gave the President, the states and the army too much power, whilst proportional voting meant that the Reichstag was divided and 1919-23, extremists on both the Left (especially the Spartacist revolt) and the Right (especially the Kapp Putsch) tried to overthrow the government.

The worst crisis occurred in 1923, when the French invaded to try to force Germany to pay reparations.This led to hyperinflation and a number of rebellions (particularly Hitlers Munich Putsch).

HistoryLearning on the early problems- excellent

– Giles Hill on the challenges facing the Weimar republic

Munich Putsch- from the TV dramaThe Rise of Evil

The Weimar Constitution did not create a strong government:

led to 28 parties. This made it virtually impossible to establish a majority in the Reichstag, and led to frequent changes in the government. During 1919-33, there were twenty separate coalition governments and the longest government lasted only two years. This political chaos caused many to lose faith in the new democratic system.

, led by the right-wing General Hans von Seeckt, was not fully under the governments control.It failed to support government during the Kapp Putsch or the crisis of 1923.

were right-wing and wanted to destroy the government.After the Kapp Putsch, 700 rebels were tried for treason; only 1 went to prison.After the Munich Putsch, Hitler went to prison for only 9 months.

, the man who signed the armistice (and therefore a November criminal), was shot.In 1922, they assassinated Walter

, the SPD foreign minister, because he made a treaty with Russia.

On 89 November 1923, Hitlers Nazis tried to take control of Bavaria (theMunich Putsch).Source A 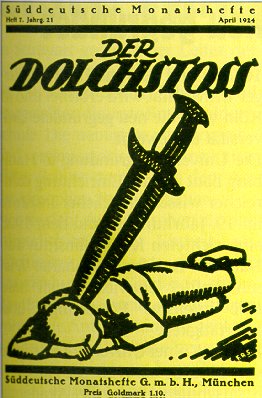 One of the main problems for the Weimar government was the right-wingDolchstosslegende- the claim that the Army had been stabbed in the back by the government (whom the right called the November criminals).

1.List all the problems facing the Weimar republic in its early years in order of date.For each problem, decide how big a problem it was.

2.Here is a list of the factors which helped to cause the Weimar governments problems:

a.find the times when it caused problems for the government.

4.Looking at all the information on this page, what do you think:wasthe Weimar Republic doomed from the start?